“NBWA’s Life Service Award is given to beer distributors who have dedicated a lifetime of service to the industry, their community and fellow distributors,” said NBWA President & CEO Craig Purser during the award presentation.

Archer dedicated more than 10 years of service on NBWA’s Board of Directors and held every elected position, serving as chairman of the NBWA Board from 2012-2013. He also is the former president of the Virginia Beer Wholesalers Association.

2014-2015 NBWA Chairman of the Board Eric Best said, “Bob Archer is a man who is very familiar to many in this industry for his vision, dedication and endless energy for independent beer distributors.”

Since 2001, Archer has served as president and CEO of Blue Ridge Beverage Company, a family-owned and -operated business with locations in Salem, Waynesboro, Lynchburg, Abingdon and South Boston, Virginia. He runs the company alongside several family members, including his mother, Regine, and his brothers and sisters – Nancy Doucette, Jim Archer, Paul Archer, Evelyn Hunt and Jackie Archer.

Although the company began in 1938, the Archer family has led Blue Ridge since 1959 when James and Regine Archer purchased the company. After James passed away in 1972, Regine stepped in as president. Today, she still serves Blue Ridge as chairman of the board. NBWA honored Regine Archer with its Life Service Award in 2005.

“Over the years, we have been blessed with good people who have shared in our vision and worked very, very hard to make it a reality,” Archer has said.

Archer takes pride in Blue Ridge being a family business. “The one major positive impact of the family business model is our ability to become totally engaged in our communities in both charitable and political perspectives,” he has said.

Archer has served numerous local charities and community organizations throughout his career, including those benefiting the military and their families. He is involved with the Lewis-Gale Medical Center, Virginia Chamber of Commerce, Virginia Tech Foundation, Virginia Center for Healthy Communities, the Military Family Support Center and the Virginia Veterans Services Foundation. He also is a member of the First United Methodist Church.

Before working in the family business, Archer served our country. He joined the U.S. Army in 1969 and served as an officer with the 82nd Airborne Division. He also served in Vietnam with the 22nd Replacement Battalion until 1972. During his service, he attained the rank of colonel. In 1999, Archer retired from the U.S. Army Reserves and the Selective Service System after 30 years of military service.

Purser added, “During his service to NBWA, Bob was known for three things: his Virginia Tech team spirit; his passion for photography; and an unmatched love for his family. His biggest fan and supporter is his wife, Sandy. Bob and Sandy are proud parents to three daughters - Michelle Sykes, Lori Raible and Jill Perez – and beam when telling stories about their six grandchildren.”

The National Beer Wholesalers Association (NBWA) represents the interests of America’s 3,300 licensed, independent beer distributor operations in every state, congressional district and media market across the country. Beer distributors are committed to ensuring alcohol is provided safely and responsibly to consumers of legal drinking age through the three-tier, state-based system of alcohol regulation and distribution. To learn more about America’s beer distributors, visit www.AmericasBeerDistributors.com. For additional updates from NBWA, follow @NBWABeer on Twitter, watch NBWA videos on www.youtube.com/NBWABeer and visit https://www.facebook.com/pages/NBWABeer. 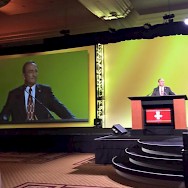 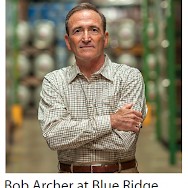