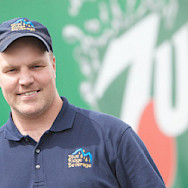 Flash back to 1949 when a Chicago chemist named Bill Swartz came up with the idea for a new beverage after hearing the complaints from his coworkers around the office about the lack of vitamins in foodstuffs. Experimenting with the B vitamin family, Swartz soon had the formula for a carbonated, vitamin – fortified drink he christened Dr. Enuf.

Next, Swartz placed an ad in national Bottler’s Gazette (the forerunner to Beverage World) seeking someone to bottle and distribute his new beverage. Seeing the ad, Tri-City Beverage’s Charles Gordon met with Swartz, and a partnership between the two businessmen was quickly agreed upon.

On the eve of Dr. Enuf’s arrival in stores, Gordon launched a clever marketing campaign to promote the fledgling brand. Soon, “Dr Enuf is Here!” bumper stickers began appearing on doctors’ cars at the local hospital. A banner proclaiming “The Dr. Has Arrived” was hung across Johnson City’s Main Street. Finally, Gordon placed a full-page advertisement on the back page of the Johnson City Press Chronicle identical to the paper’s front page. he then paid carriers to fold the paper backward.

Within a few months, all of Gordon’s hard work paid off. Although it was priced 20 cents more per bottle than competing soft drinks at the time, Dr. Enuf was selling out in all stores across Tri-City Beverage’s northeastern Tennessee territory. “We actually ended up rationing Dr. Enuf in those early days,” remembers Gordon. “There just wasn’t enough of Dr. Enuf to go around.”