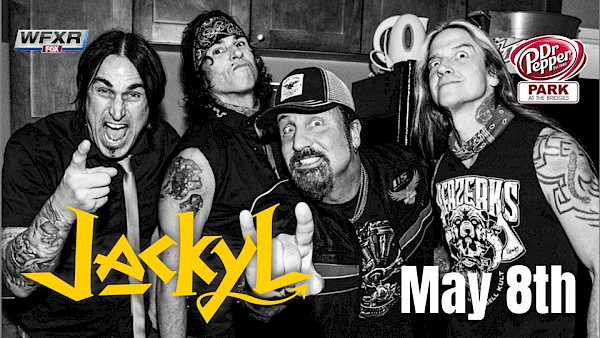 Jackyl-
It’s been 25 years since Jackyl shot out of Georgia with its wild, untamed and uncouth approach to rock ‘n’ roll. Equal parts hard rock, heavy metal and Southern rock, Jackyl formed in 1991 and brought back rock ‘n’ roll back — back to its down-to-earth, wild, fun-loving origins.
The band earned two Guinness Book of World Records citations and the designation “The Hardest Working Band in Rock ‘N’ Roll” for performing 100 shows in 50 days as well as 21 shows in 24 hours. Dupree says the most grueling of the two was 21 shows in 24 hours; Jackyl completed that task in Texas, and the shows were all done with full lights and sound. The daytime sets were 45 minutes long whereas the ones done at nighttime were between 90 and 120 minutes long. Jackyl released ‘Relentless’ on Humidity Records in 2002. It contained the second collaboration with Brian Johnson, “Kill the Sunshine.” Universal Music/Geffen Records also issued a Jackyl volume as part of its acclaimed ’20th Century Masters – The Millennium Collection’ best-of series in 2003. For a band that built its reputation as road warriors, it’s surprising that a full-length live album meant for worldwide release did not appear until 2004 with the separate release of the ‘Live at the Full Throttle Saloon’ CD and DVD on Sanctuary Records. ‘Live at the Full Throttle Saloon’ was recorded and filmed in summer 2003 in Sturgis, South Dakota, as part of the legendary annual biker rally festivities held there.